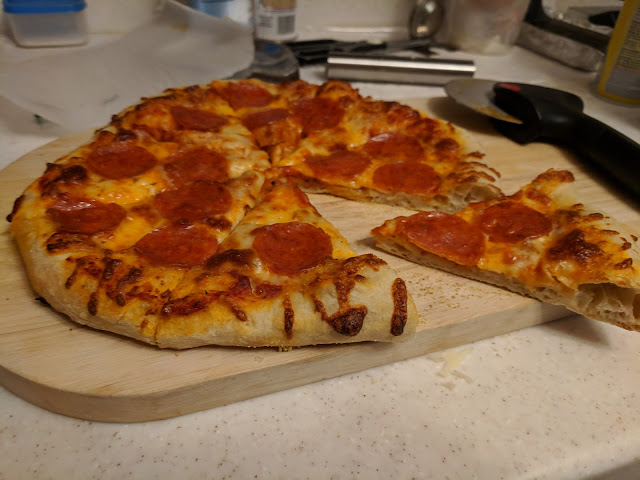 American pizza is a staple of American life. From birthday parties for children, to Friday night family movie time, to the ever-present bribe for college students, pizza is everywhere. You can buy it by the slice in a mall, order it online, or even try gourmet versions. And people have some pretty strong opinions about which of the many American pizza styles is best.


My personal favorite to bake at home is a classic, New York style pizza. I use the recipe from Serious Eats (linked above) for the dough. The slow rise/ferment in the refrigerator is really worth it because resulting crust is amazing: it's chewy, flavorful, and an excellent support for sauce, toppings, and cheese.  Sometimes I make my own sauce, sometimes I buy it ready-made. Don't tell the pizza fanatics, but I really can't taste the difference, so what I use depends strictly on if I want to go to the trouble of making my own sauce.

One thing that does matter is cheese. I don't buy high quality these days (though I have in the past), but I do buy it in a block. Pre-grated cheese in America is typically coated in some combination of starch and cellulose, to keep those strands of cheesy goodness nice and separate, and to help keep them from melting in the bag. The problem is that those coatings also affect the cheese outside the bag, changing both consistency and melty-ness (technical term). It doesn't matter in every recipe, but I like my pizza cheese to be well melted, so I grate my own cheese.

Other than that, homemade pizza is pretty straightforward. Cornmeal on your pizza peel (if you choose to use one) helps keep the dough from sticking. A pizza stone in the oven helps dough texture and cooking, but is not so mind-blowing in its impact that skipping the stone will ruin your pizza experience (again, don't tell the fanatics I said that). What I find most important is sharing the pizza with family. Yes, you can gobble this whole 12 inch pizza yourself, but it's more fun to share something this good with people you love.