I have two reasons for making treacle tart. First, it was a technical challenge on the Great British Bake-Off using Mary Berry's recipe. It looked like a finicky, challenging recipe to make. The bakers struggled a bit to make something that turned out nicely. As is common on GBBO technical challenges, the version of the recipe given to GBBO bakers was missing the majority of the instructions that would have made it relatively simple. The version of the recipe printed online by the BBC was easy to follow and came out beautifully. I'm definitely going to seek out more Mary Berry recipes to try, and I can see why she has the reputation she does. She suggested serving the tart with a dollop of creme fraiche. I enjoyed the combination, but my husband was less excited. We both enjoyed the tart immensely. 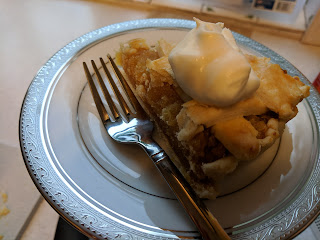 The other reason I chose treacle tart to represent England is its status as Harry Potter's favorite dessert. I had assumed treacle tart would taste a lot darker, more molasses-y---a kind of pecan-less, British version of pecan pie. It's actually very light: it has a light, lemony taste that is refreshing in its sweetness. The tart is a combination of shortcrust style pastry, golden syrup thickened with breadcrumbs, and lemon zest. It's probably the best recipe I've made as a part of this project, and it's a new family favorite in my house. I would definitely recommend trying it soon!