If a scone and a pancake had a baby, it would be the Welsh Cake. We completely devoured these small cakes. They are tender, sweet, and well-flavored, studded with currants and allspice. They're also known as bakestones, after the traditional tool used to cook them. Modern Welsh Cakes are made on a heavy griddle. 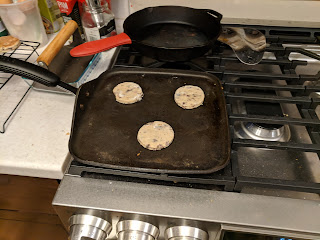 Since Welsh Cakes are like chocolate chip cookies or apple pie---common dishes in their country of origin with numerous family recipes---I had to find a recipe I could trust. I opted to use Mary Berry's, based on the success I found with her treacle tart recipe. 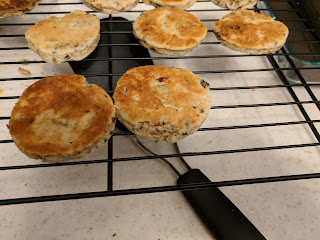 My only caveat  for this recipe would be to consider reducing it by half, or freezing half of the dough if you aren't serving four people. It makes 2 dozen cakes, which is more than enough for two, and these are addictive enough that you might end up eating all of them in one day, like we did.